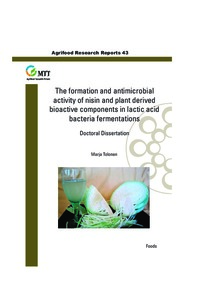 This study focused on the formation of nisin, a 34-residue antibacterial polypeptide, and plant-derived biomolecules and their antimicrobial properties in lactic acid bacteria (LAB) fermentations. The role of the genes nisB and nisC in the nisin biosynthetic pathway (nisA/ZBTCIPRKFEG) was investigated. Nisin was produced in M17G medium and in cabbage juice by fermenting with a wild-type Lactococcus lactis N8 and the mutant strains LAC48 and LAC67. The fermentation types were: 1) pH not controlled, 2) adjusted at pH5.5, 3) recycling of L. lactis cells (pH5.5) (circulated batch), and 4) cabbage (sauerkraut) fermentation without pH control. Besides nisin, the focus was on the formation of plant-derived molecules, especially glucosinolate breakdown products in cabbage fermentation. The cabbage fermentations were inoculated with the following starter cultures: Lactobacillus plantarum, L. sakei, Leuconostoc mesenteroides, Pediococcus pentosaceus, P. dextrinicus, Lactococcus lactis N8, and L. lactis LAC67. Nisin was produced in different types of fermentations. The nisin titer achieved in batch fermentations in M17G medium was 2200 - 2500 IU ml -1 . In the case of LAC48 the concentration remained high also after the logarithmic growth phase, whereas nisin production by the strain N8 was more typical: the nisin titer decreased after the maximum growth. The result showed that nisin production in the case of LAC48 was not directly related to biomass formation and was not associated with growth, which is not typical of nisin production. In order to study end-product inhibition in nisin production, a system (circulated batch) was built for nisin adsorption during fermentation. The adsorbent Amberlite XAD-4 was found to bind nisin effectively. Cells of the strains LAC48 and N8 were able to compensate the removed nisin throughout fermentation, indicating that nisin production also occurs in the stationary phase. A high concentration of nisin (8000 IU ml -1 ) was achieved by eluting nisin from the XAD-4 resin. Nisin was produced in sauerkraut fermentation up to 1400 IU ml -1 and was detectable (250 IU ml -1 ) in sauerkraut even after 13 days fermentation. The role of the proteins NisB and NisC in nisin maturation has been unclear to the present day. This study showed that NisB is required for dehydration and NisC for lanthionine formation in post-translational modification of nisin. Nisin precursors from the strain lacking NisB activity were totally unmodified, whereas from the strain lacking NisC activity, but having NisB activity, were dehydrated but lacked normal lanthionine formation. This is the first reported experimental result indicating the role of NisB and NisC in correct modification of nisin. In addition to nisin, plant-derived biomolecules have been shown to possess antimicrobial properties and also to exhibit potential health effects. However, formation and/or degradation of these biomolecules in fermentation process has not been well known. In the present study, plant-derived biomolecules, glucosinolates, were decomposed during cabbage fermentation, forming beneficial breakdown products such as isothiocyanates (ITC), indole-3- carbinol (I3C) and sulforaphane. The research showed that lactic acid bacteria may affect the degradation of glucosinolates and the formation of breakdown products in cabbage fermentation. When L. sakei was used as the starter culture, the concentrations of 3-methylsulphinylpropyl-ITC, allyl-ITC and sulforaphane were significantly higher compared with the end-products using other (single strain) starter cultures. Goitrin was found in substantially high concentrations in all end-products of starter-culture fermentation. Sulforaphane nitrile, allyl-nitrile, and goitrin were found in small quantities in the end-products of mixed-culture (L. mesenteroides + P. dextrinicus) and spontaneous fermentation. Inhibitory effects of fermented cabbage juices were observed using the indicator strains Escherichia coli, Listeria monocytogenes, and Candida lambica. The strongest inhibitory effects of cabbage juice were achieved by juice fermented with the strains Lactobacillus sakei and Leuconostoc mesenteroides, which also had the highest AITC concentration. Further, the juice fermented with L. sakei was capable of effectively inhibiting the growth of C. lambica and E. coli, but not of L. monocytogenes. The results indicate that concentrated nisin (8000 IU ml -1 ) can be produced by using Amberlite XAD-4 adsorbent and that bioactive glucosinolate breakdown products are formed in cabbage fermentation. A combination of these compounds may be used to extend food shelf-life, offering potential for the biopreservation of foods. In order to maximize the production of glucosinolate breakdown products potentially beneficial to health, the use of cabbage cultivars containing a high concentration of glucosinolates sinigrin, glucobrassicin, and indolyl glucosinolates is suggested. Further study is needed to optimize the cabbage fermentation process (starter culture, pH, temperature, etc.). The inhibitory effects of the combinations of nisin and glucosinolate breakdown products on food spoilage microbes should be further characterized in future research by using a wide variety of food pathogens and spoilage microbes.