Determinants and influence of foreign direct investments in the hungarian food industry in a central and eastern Europan context : an application of the FDI-concentration map method 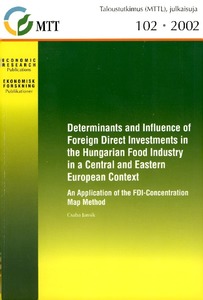 The food processing sectors of the Central and Eastern European countries were a scene of unprecedented institutional and economic reforms during the post-socialist era of the 1990s. The ownership changes aroused the interest of foreign investors. Hungary had nearly two-thirds of its food processing capital in foreign hands by 1998, the highest proportion of any country in the region for this sector. Hence it serves excellently as an object for de-tailed investigations into the foreign direct investments. The dissertation is centred around three major objectives. The first is to identify the motives behind food industry FDI in Hungary, the second is to assess the influence it has had. Since foreign investors have expressed greatly differing levels of interest in the various food processing industries not just in Hungary but in the entire CEE region, a third objective is to reveal and compare the motivating forces behind such investments in a group of countries comprising Hungary, Poland, Estonia, Latvia and Lithuania. The motives behind FDI were searched for by means of a regression model and cluster analyses of the national food industries. Based on preliminary results, a new methodological concept, the FDI-concentration map, was developed to trace trends in foreign direct investments in particular industries over time and to refine the international comparison of FDI motivations in a demonstrative way. The influ-ence of FDI was examined by calculating the dynamic performance gap be-tween domestic and foreign food pro-cessors in Hungary. The findings obtained from the analyses and the FDI-concentration maps confirm that foreign investors were clearly driven by the market power attainable in the CEE food industries. The concrete implementation of privatisation slightly modified the main tendency country by country. As for the influence of FDI in Hungary, the superior performance of foreign-owned companies relative to domestically owned ones was shown to be in evidence by the late 1990s, but the overall performance of the food industry was improving steadily. The results indicate that foreign investors attempt to maximise future profits by conquering market shares. This is a macro-regional manifesta-tion of the world-wide tendencies crystallised in the global FDI-concentration map, which implies that the food industries are becoming globalised at different rates. It is con-cluded that food industry FDI may bring joint benefits both to the investors and the CEE food industries upon the accession of these countries to the EU.