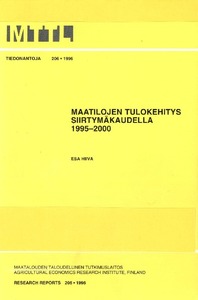 As a result of the EU membership, the operational environment of Finnish agriculture has undergone more dramatic changes than ever before in a very short period of time. Abolition of the border controls and the decrease in the administrative prices have caused the market prices of agricultural products to fall to the general European level, in the case of certain products even below the average price level in the EU. The drastic fall in the producer prices has led to a considerable decrease in the sales income of farmers. Because of the decrease in the prices of some production inputs and the abolition of the hidden sales tax the costs of agriculture have also decreased to some extent, but the cost savings compensate only for a small part of the income losses caused by the decrease in the producer prices. Consequently, the income losses must be covered mainly by means of direct support. The traditional forms of support in the EU do not take adequately into account the special characteristics of Finland resulting from the northern location. Because of this, in the Accession Treaty Finland was granted the possibility to support agriculture from the national funds. The objective of this study is to estimate the development of the economic result of farms specialized in dairy production, pig husbandry, and cereal production in the transitional period 1995-2000 on the basis of the results of the bookkeeping farms in 1993. The concepts of business economics mainly used to indicate the economic result are agricultural surplus and agricultural income. Income development is examined in a static situation, where the production structure, use of inputs, and fixed costs are assumed to remain unchanged. The prices and amounts of support as well as the estimates on the cost savings that can be achieved are based on the information available in October 1995. The result of 1995 does not include the lump sum compensations for the decrease in the value of stocks and livestock. The support from the EU is assumed to stay at the level of 1995 for the whole transitional period. The cuts in the support due to the saving measures in the national economy have not been taken into account in the amounts of national support. The calculations do not include the support in the case of serious difficulties referred to in Article 141 of the Accession Treaty. The negotiations with the Commission on this support are launched in the beginning of 1996.