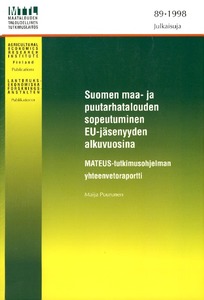 In the beginning of 1995 the Ministry of Agriculture and Forestry set up a special research programme to find out and make preparations for the economic impacts of the EU membership. The projects were directed to the economic adjustment of the Finnish agriculture and horticulture at the early stages of the membership. Originally the programme period was 1995-1999, but later on a decision was made to bring it to a conclusion at the end of 1997. The programme contained both short-term surveys and monitoring and more in depth examination of the long-term effects. The main emphasis was on short-term surveys and studies necessary, among other things, for the complementing the aid scheme for agriculture and horticulture, which had remained incomplete in the Accession Treaty. The projects implemented in the MATEUS research programme concerned five main topics: The aid for serious difficulties, adjustment to the common agricultural policy of the EU, effects of environmental aid, regional adjustment and development of information systems. In connection with the aid for serious difficulties the research concentrated on the income development in agriculture and the plans of farms related to the continuation of agricultural production and investments on the basis of the bookkeeping farms as well as extensive inquiries and other data. There was a number of projects concerning the adjustment of agriculture and horticulture to the common agricultural policy of the EU and the new market situation in the different production lines for the part of the product markets of e.g. milk, meat, cereals and eggs. In the study concerning the structural change in agriculture the main emphasis was on the possibilities to increase the farm size, investment needs and profitability as well as financing of transfers of farms to descendants. The future changes in the agricultural policy of the EU were also involved in many of the MATEUS projects. An extensive project concerning the impacts of the environmental aid scheme was financed from the MATEUS programme, and the commitment of farmers to the scheme as well as the environmental effects of the liberalisation of agricultural trade were examined. The regional adjustment included a study of income changes in agriculture and their effects on the tax revenue as well as the significance of the food chain in the different regions. At the macro level the development projects related to the information systems were mainly concerned with the development of the sector model for agriculture and at the micro level with the development of the FADN bookkeeping required by the EU. This final report of the MATEUS research programme describes the changes in the Finnish agriculture and horticulture in the first years in the EU and the challenges for the development of agriculture and horticulture due to the new market environment. This final report makes it possible for agricultural and horticultural authorities as well as different interest groups and the general public to obtain information on the contents and results of the programme. Efforts have been made to include all more than 30 projects of the MATEUS programme in the report. The number of special research project reports published is over 50, and their titles and authors are given in the list of references. In the final report reference is also made to the projects concerning the adjustment of agriculture in the "Economic adjustment of agriculture" programme of the Academy of Finland implemented in 1994-1997.