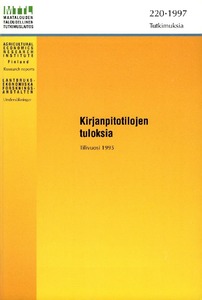 The results of agricultural profitability research in Finland in 1995 are presented in this report. The number of farms entering the research was 1 033, which is about 0,7 % of all farms more than two hectares of arable land. The profitability research is organized on voluntary basis. The results are considered to represent effective and full-time family farming in Finland. The results are presented for all farms in average and grouped according to the size and type of the farm. Results for primary production types are also presented according to the subsidy areas. Year 1995 was Finland s first year as a member of the European Union. Accession to the EU and its Common Agricultural Policy ment a great change in the conditions of agriculture and food industry in Finland. The decline of producer prices led to losses in farm incomes, which were compensated to farmers by subsidies from EU s and national funds. This caused changes in the structure of gross return and costs. Despite of the relative high level of subsidies, the profitability and farm income decreased in 1995. This was due to low producer prices, which were not fully compensated by subsidies and savings in production costs.