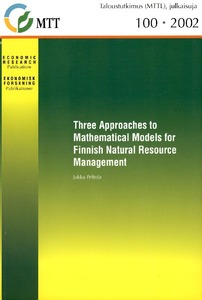 With the Kyoto protocol and scientific evidence mounting, the debate on how to mitigate greenhouse gases has intensified. In Finland, many have questioned whether the agricultural sector could reduce itŽs share of greenhouse gases by using biomass energy as a replacement for fossil fuels. The first of these three essays investigates whether and under what conditions biomass energy production on Finnish agricultural land could be justified. The other two essays are more general studies on the incentives of landowners in growing and managing energy and other crops. The second essay inroduces an approach that disentangles risk and intertemporal preferences of a private entrepreneur`s management decisions. Finally, the third essay uses modern programming methods to develop insights into a farmerŽs decision making. The first essay deals specifically with the question; how to divide up the agricultural land for alternative uses (food production and biomass energy production) and how much nuclear power to produce. It is shown that when pollution is any concern, the biomass could be one suitable energy alternative. A clear land pressure between food and biomass energy feedstock production is also demonstrated. In the second essay, a forest ownerŽs utility is modeled using recursive preference approach. The approach allows a researcher to disentangle risk-aversion and intertemporal substitution, and thus it provides policymakers with new information. The recursive preference approach is a spedial case of expected utility formulation, and therefore, it enables the outcomes from these models to be easily compared. According to the analysis, risk aversion seems to have an insignificant effect on management profiles. Istead, intertemporal substitution has a profound effect, futher strengthened when the intertemporal elasticity of substitution is low. The third essay is an application of mathematical programming to help shed light on a farmerŽs decision making process. The positive mathematical programming (PMP) is used to calibrate a mathematical model to a multiyear data set, and maximum entropy (ME) is used to determine cross-effects of different activities in a cost function of a farmer. The program performance is tested out-of-sample on different levels of data aggregation. The main findings are that the model performs well, and the ability to use more detailed data produce better results in calibration. However, with this particular data, the better calibration fit does not translate to significantly better forecasting results.