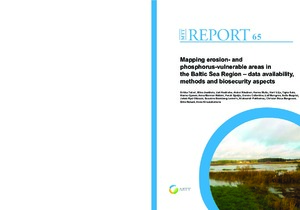 Soil erosion and nutrient leaching from terrestrial systems to rivers, lakes and marine environments cause deteriorating water quality and eutrophication. In all the countries of Northern Europe, agriculture is considered to be responsible for the greatest contribution of phosphorus (P) and high contribution of nitrogen (N) to coastal waters. Recently, there has been great pressure from both the environmental and agricultural sector to target the environmental measures at the areas with the highest risk for nutrient leaching and loading. Topographic, hydrologic, geomorphologic and agronomic factors often combine to make erosion and leaching from certain areas higher and more detrimental to the aquaculture than from others. Therefore, methods to identify and prioritise agri-environmental measures on these nutrient-vulnerable areas are desirable. This report examines data availability and methodology to identify the critical source areas in the Baltic Sea Region (BSR) countries. Here critical source areas are comprised mainly of erosion- and phosphorus-vulnerable areas that can often also be related to the biosecurity risk of animal husbandry. Ava ilability, determination methods and quality in basic background data required for the inventories vary widely in the Baltic Sea basin countries. Background data should include spatially detailed information from elevation, river networks, soil (soil type, P status etc.) and agricultural management (plant cover, fertiliser rates, livestock density etc.). Risk assessments are usually made at the municipal or catchment level, depending on which regional level the statistical data are available. The differences in the soil classification systems, soil P analysis and accuracy of the data needed for the mapping prevent uniform assessments and comparisons between the countries. The accuracy of the existing risk maps is difficult to verify with water quality observations, since the observations are scarce, especially from individual risk areas. Erosion risk maps are produced mostly with USLE based methods, which are also suitable for mapping areas at risk of P leaching. In USLE-maps, the risk areas are mainly located on steeply sloped fields. USLE describes the high risk areas by surface processes. Thus, the transport of solids and P through soil matrix and via the macropores is ignored in USLE examinations. If the calculation takes into account the distance to water and if the channel map is accurate, also fields further away from the water bodies can be classified as risk areas. Meanwhile, when topographic mapping is used as the index calculation methodology, flat areas will be classified as risk areas because this method puts weight on gentle slopes with fairly large catchment areas above them. The third option is based on physical GIS-based models, which can model simultaneously hydrology and nutrient transport. In general, these models require a lot of input data and in lack of them the possibility of erroneous results increases. The P-index is often considered to be a cost-effective tool to reduce P leaching. The major challenges are lack of data (mainly on soil P status), and uncertainties and the need for additional validation of the model. Areas with high animal density and high risk of surface runoff or erosion are potential high-risk areas as regards biosecurity. By combining relevant maps, such as animal density and erosion risk areas, potential high-risk biosecurity areas can be identified. It would be important to improve the availability of more accurate, larger-scale data for the use of researchers and designers. The central issues in presenting the risk areas are accuracy, objectivity and clarity. High-risk areas and fields should be shown as objectively as possible and after solving their locations, possible mitigation measures to reduce risks in the problematic areas could be discussed and agreed with the stakeholders.