From Waste to Traffic Fuel (W-Fuel) 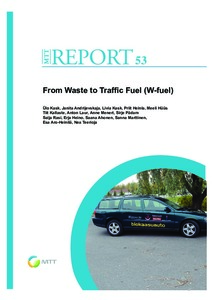 The EU directive on the promotion of the use of energy from renewable sources (Directive 2009/28/EC) sets a mandatory minimum target for the use of fuels produced using renewable energy sources of 10% of total petrol and diesel consumption in the transport sector by the year 2020. In addition, it states that production of renewable fuels should be consistent with sustainable development and must not endanger biodiversity. In the INTERREG IVA Southern Finland - Estonia Sub-programme, efforts towards finding solutions to the tasks set by the EU were undertaken in co-operation with Finnish and Estonian researchers. The purpose of the From Waste to Traffic Fuel (W-Fuel) project was to promote the sustainable production and use of biogas using locally-sourced biodegradable waste materials from the food and beverage industry and the agricultural and municipal sectors. The ultimate aim of the project was to upgrade the biogas (produced based on anaerobic digestion of biodegradable wastes, sludge, manure, slurry and energy crops) to biomethane with a methane content similar to natural gas, to be further used as transport fuel with the aim of reducing traffic-borne emissions, in particular CO2. The project combined waste, energy and traffic solutions in order to decrease emissions, costs and the use of materials. Six case areas in southern Finland and northern Estonia were selected. The two case areas in Estonia were the counties of Harju and Lääne-Viru in northern Estonia. The project aimed to promote waste and sludge prevention and to commence biogas production and its subsequent upgrading to biomethane for use as a renewable fuel. The project promoted regional businesses and employment in waste treatment and green energy production. On basis of the gathered data, the biogas potentials and prerequisites of each case county were analysed. Furthermore, the environmental, economic and other regional effects of the different options were compared. By developing research-based feasibility plans, the project partners provided solutions for public and private companies, local governments and research institutes. The project was implemented in close co-operation with municipal waste and sewage companies as well as stakeholders in industry and the agricultural and transport sectors. This report presents the project results for Estonia.