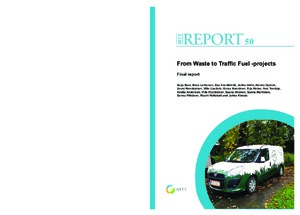 The main objective of the project was to promote biogas production and its use as traffic fuel. The aims in the four Finnish and two Estonian case regions were to reduce the amount and improve the sustainable use of waste and sludge, to promote biogas production, to start biogas use as traffic fuel and to provide tools for implementing the aims. The results of this study show that achieving the food waste prevention target will decrease greenhouse gas emissions by 415 000 CO2-eq tons and result in monetary savings for the waste generators amounting to almost 300 / capita on average in all case regions in 2020. The results show that waste prevention should be the first priority in waste management and the use of waste materials as feedstock for energy production the second priority. In total 3 TWh energy could be produced from available biomass in the studied case regions. This corresponds to the fuel consumption of about 300 000 passenger cars. When a Geographical Information System (GIS) was used to identify suitable biogas plant site locations with particular respect to the spatial distribution of available biomass, it was found that a total of 50 biogas plants with capacity varying from 2.1 to 14.5 MW could be built in the case regions. This corresponds to 2.2 TWh energy and covers from 5 to 40% of the passenger car fuel consumption in these regions. Using all produced biogas (2.2 TWh energy) for vehicle fuel GHG emissions would lead to a 450 000 t CO2-eq reduction. The same effect on emissions would be gained if more than 100 000 passenger cars were to be taken off the roads. On average, the energy consumed by biogas plants represents approximately 20% of the produced energy. The results also show that biomethane production from waste materials is profitable. In some cases the biomethane production costs can be covered with the gained gate fees. The cost of biomethane production from agricultural materials is less than 96 /MWhth, meaning that biomethane production from agricultural materials is profitable after the biomethane demand has become established. It is also notable that if the trend in biomethane consumption follows a 10% growth path, employment could increase from 84 to 178% depending on the studied case region.