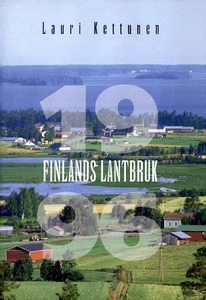 The early part of summer 1996 was rainy and cool, and the crop outlook was not too good. Instead, in August it was very warm and dry, which seems to have been favourable for agriculture, because the yield rose to the normal level. The cereal yield was 3.7 bill. kg, and the total yield measured as fodder units was 5,663 mill. f.u., which exceeds the yield of 1995 by 3 %. The cultivated area grew by almost 10 % from the previous year, which explains the increase in the total yield. The set-aside area decreased and it was only 10 % of the total arable land area. The earlier trends continued in livestock production. Milk production fell by about 1.5 %, and about 2,000 milk producers quit their production every year. The total of the farm quotas exceeds the national quota granted to Finland by 5-6 %, and the farm quotas will be cut by this amount in the beginning of April, 1997. The trade on quotas will become administered again in order to be able keep the costs of the expanding dairy farms in control. Pigmeat production grew by 3 % in 1996, and the market situation was quite good. The market prices were on the increase almost throughout the year as the meat consumption was transferred from beef to pigmeat. In Finland beef production stayed at about the same level as earlier, and the BSE disease did not influence the Finnish beef markets. The consumption of poultry meat continues to grow, and in 1996 the production increased by 18 %. There has been some increase in the foreign trade of meat. Pigmeat, in particular, is being imported and exported to an increasing extent. No major changes occurred in the consumer prices and, consequently, consumption stayed at about the same level as earlier. Like in the past few years, cheese consumption grew to some extent, and poultry meat consumption also continued to grow very strongly. Instead, there was some decrease in the egg consumption. According to a preliminary estimate, agricultural income fell by about 7 %. This was mainly caused by the decrease in the amount of aid by about FIM 1.0 bill. Agricultural income calculated at the market price rose by FIM 0.5 bill., mainly as a result of the increase in the amount of cereals entering the markets. The crop was good and stocks were discharged. The second year did not bring along any significant changes in the agricultural production or prices. However, there is still a great deal of uncertainty about the future among the producers. The number of farms decreases quite rapidly, and this has aroused speculations about the collapse of agriculture especially in the more remote areas. However, no alarming changes are foreseen in the production, and investments have also been made, which indicates that there is still faith in the Finnish agriculture.